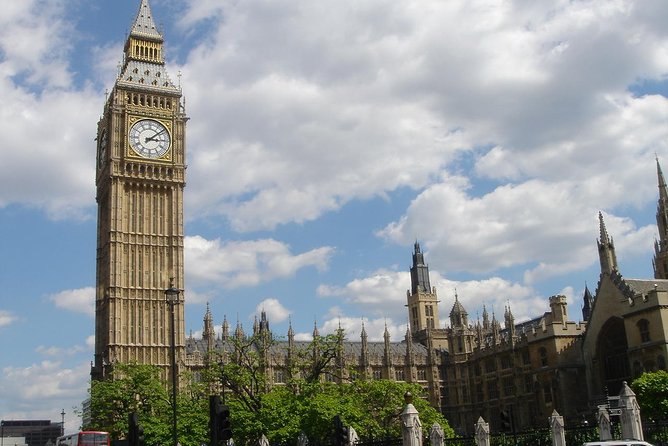 Private tour.. You and your group will be the only ones on the tour. I drive a very comfortable Mercedes V-class, large enough for 7 passengers. For larger groups a minibus can be arranged (different rate). As a 'Blue Badge' qualified guide, I am permitted to guide within many popular locations, including Tower of London and Westminster Abbey.

INR 56,381
p.p. onwards
Itinerary
This is a typical itinerary for this product

TOUR IS FLEXIBLE. Guests can choose to go inside for detailed tour (budget for 1.5 hours) or a walk around the Church for basic information and photos. Founded in the 10th Century, Westminster Abbey, is the venue for Coronations, royal weddings, royal funerals, royal burials and other notable burials such as Charles Dickens, Isaac Newton and Charles Darwin.

TOUR IS FLEXIBLE. Guests can choose a detailed tour (budget for 2 - 2.5 hours) or walk around with an overview and photos.

Tower Of London which is a huge castle. Oldest part of the Tower dates from the late 11th Century but most of what you will see was completed by the 14th Century. It has been used as a mint, museum, observatory, a zoo and a place of execution (including 2 of King Henry VIII's wives) and other prisoners too. The Tower is also where you can see the Crown Jewels which are used in the coronation ceremony.

To give its proper name.. the Palace of Westminster. Origins go back to 11th Century and used as a royal residence until 16th Century. First Parliaments met in the Chapel of the palace in the 13th Century and been home to UK's parliament ever since. Present building dates from 19th century. Eastern side of building has clock tower known as Elizabeth Tower which houses 5 bells, the largest being the hour bell known as 'Big Ben'

TOUR IS FLEXIBLE. Guests can choose to do a detailed visit (budget for 1 hour) but usually this tour stops for overview and photos.

This iconic 'Bascule Bridge' and image of London was completed in 1894. The Bascules raise to allow tall marine vessels into the pool of London on average about 3 times a day.

Present Bridge opened in 1973 and is 5th major incarnation. the first London bridge across the River Thames was built by the Romans in early 2nd Century

Main London residence of the UK's Monarch since early 19th Century. Interior is open for tours in August and September. TOUR IS FLEXIBLE. on this tour we usually have an overview and photos. visit to Buckingham Palace coincides with Changing of Guard (if happening on the day of your tour)

Pomp and ceremony. Guard change is not everyday. usually held on Monday Wednesday Friday and Sunday. Weather permitting. TOUR IS FLEXIBLE. If Guard change is on, we watch about 15 minutes of the hour long ceremony.

Together with Kensington Gardens, largest park in central London. TOUR IS FLEXIBLE. Usually drive through park and a photo stop.

Built to commemorate the Royal Navy's victory at the Battle of Trafalgar in 1805. Significant naval battle which thwarted French Emperor Napoleon's invasion plan of Britain. TOUR IS FLEXIBLE. Usually drive by but can stop if guests wish to

Originally stood as a gateway to Buckingham Palace. relocated in mid-19th Century, swallowed up by traffic junction in 1960s

at 135m high, was the world's highest observation wheel when it opened in 2000. one rotation takes about 30 minutes. great views of London, in particular, Parliament, St James Park and Buckingham Palace. TOUR IS FLEXIBLE. guests can choose to take a ride on London eye budget for 1 hour by time collect tix etc and doing the ride... Usually just drive by

Originally constructed as a gateway to, the now long gone, Whitehall Palace, Horse guards is now a ceremonial gateway to Buckingham and St James's Palaces. Guarded by the Household Cavalry, with their distinctive uniform. TOUR IS FLEXIBLE. usually just drive by.. but can stop for photos

One of 5 central London Royal parks, orginally landscaped in 1600s, re-landscaped in early 19th Century . Has a variety of flowers beds and trees and the lake has assorted wildfowl. TOUR IS FLEXIBLE. If going to see guard change will walk through the park. If no guard change, usually drive by

Traveler pickup is offered
Pick up from guests' hotel. Drop off at same location (or other mutually agreeable location). I offer this tour direct from London airports and cruise terminals. Different rates apply

star star star star star
Glen’s tour was one of the best decisions we made on our London trip. He’s an encyclopedia of London and so funny. He made our tour enjoyable, informative and fun. I had a mixed group with different personalities but he masterfully entertained everyone, even made a stop to the High Commission of The Bahamas, which the group loved bc they’re Bahamian. A great time was had by all.

star star star star star
Glen took us around London for 3 days, two days by car and one on foot. He’s awesome! I had visited London many times but my friend had not, so I expected to enjoy seeing familiar sights but not learn much that was new to me. Not so! Glen showed me places that I didn’t even know I wanted to see - especially on the walking tour. I came away with a new appreciation for the city and for the fascinating details that you uncover when someone as knowledgeable as Glen is showing you around. One of my favorite things about Glen’s tours was his iPad. Very often he would not just talk about a location - he would also show me a photo or video of someone or something that had happened in that exact spot. It really brought places to life for me. Thank you Glen for an amazing three days.

star star star star star
Glen was fantastic. Professional, friendly, funny and knowledgeable. This is a great tour. I don’t generally do reviews good or bad but this was to good an experience to not let others know.

star star star star star
For the SECOND time I have been given a most spectacular tour of London by Glen Portch. My family visited London eight years ago and were amazed by Glen and his good humor and professional approach to the history and back stories of England in general, and London in particular. Through his use of bus, boat, and tube, we were able to cover so much of the city in a day's time that we could never have covered on our own, plus hear the rich history behind the landmarks. He is delight to be with and we have recommended him to others going to London. Do not miss an opportunity to have this kind of guidance when you are touring London or beyond.

star star star star star
Thanks to Glen, we had a wonderful time touring Stonehenge, Bath, Oxford, Cotswolds, York, Cambridge and London. Besides sharing his wealth of knowledge of English history and England in general, he delighted us with his story telling and wit. Always punctual, polite and patient, he planned an itinerary which allowed us to see everything on our wish list without feeling rushed. Glen was always willing to go out of his way to meet our needs, and offered great suggestions on pubs and sights, with a few surprises along the way. Couldn't have been better- he's an outstanding tour guide!!!

star star star star star
Our tour guide was very flexible and easygoing. I had a great experience and would highly recommend. Overall very fun and informative day.

star star star star star
We were more then satisified touring with gren tours. The tours of London and stonhendge were informative , interesting and fun all in one. I would highly recommend!!!

star star star star star
Alas, you should be a Spinal Tap fan to catch the reference made in the title of my review. I am.....and so is Glen. Glen goes to 11. From his first introductory email, his service and education shines. I was on the hunt for a family friendly tour outside of London. We chose Windsor and Highclere. It was a perfect break from the nonstop coming and going while we were in Central London. His advice was very helpful. The “pointers” he would give as my wife and I deliberated on what to do and where to go was helpful beyond words. I felt I was a seasoned traveler and historian before I landed. During the tour, Glen was exceedingly kind to our three daughters. His tour was informative for adults and fun for children. He senses when the kids are running low on energy and adjusts his advice on what to do next on that. This is so valuable!!! His car was comfortable beyond words (Mercedes Van). As we weaved our way through London traffic, he can immediately point out anything that ever happened on that particular block you are on. You will not be disappointed with Glen. He is great!

star star star star star
To borrow from 2 reviewers who have gone before me: If you only book one tour this year, do yourself a favour and book this one Best Tour Guide Ever! We only had one full day in London and wanted to make the most of it so we booked the fabulously awesome Glen to help us. We did the full day tour in his ultra comfy 7-seater Merc and I cannot believe we fitted so much in, but without feeling hurried or scrimped. He shared so much information and imparted his knowledge in a fun and interesting way we loved what we learned and were sad when the day ended. If you're considering a tour, don't hesitate - or miss out - get yourself booked in, you will NOT be sorry. Thankyou Glen!
Previous Next
keyboard_arrow_up