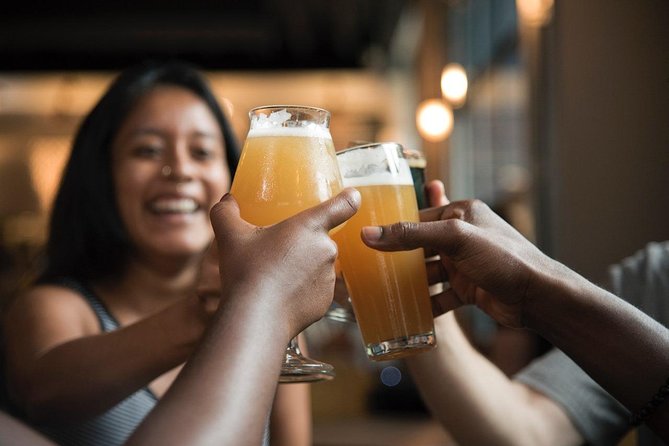 Enjoy a guided tour of the most interesting and charismatic pubs in London’s Notting Hill and Kensington. Sample a wide variety of traditional British, full-flavored cask ales, and modern craft beers in some of London’s most unique pubs.

INR 5,229
p.p. onwards
Itinerary
This is a typical itinerary for this product

We’ll take a guided tour of the most interesting and characterful pubs in London's Notting Hill and Kensington. We’ll venture away from the tourist routes and explore the backstreets, where the local people drink. These are the same pubs that I still enjoy visiting with my friends, and they are well known for their fine beers, good food and friendly atmosphere.

Marvel at the immaculately-maintained Georgian, Victorian, and Edwardian architecture of these charming neighborhoods. Their numerous blue plaques identify the buildings, which were once owned by significant historical figures, such as the detective novelist and playwright, Agatha Christie, and American poet, Ezra Pound. You can also see the home where the triple-Oscar-winning actor, Daniel Day-Lewis, was born. Savor the abundant varieties of plants and trees, and also the diverse architecture of the local churches, as we walk between pubs, in what are arguably the most stunningly beautiful neighbourhoods of inner London.

After going out in this area for years, several pubs have become firm favorites. One was where Freddie Mercury of Queen, regularly had a drink or two, and another where Meghan Markle had drinks prior to leaving for dinner to meet Prince Harry. We’ll be visiting a few of them, each with its own character, history and selection of exquisite beers.

star star star star star
This is a fantastic tour of some of the nicest and historical pubs in the well chosen neighborhoods of Kensington and Knotting Hill. Chris our tour guide was friendly and very knowledgeable in the history of the pubs and neighborhood. Chris is also very professional and follows up on all the plans. Our entire group had a great time!

star star star star star
Really enjoyed our tour with Chris. We visited 4 pubs each one different,tasted some excellent british beers and joined the lively atmospheres and had a tour of the history of the neighbourhood while walking between the pubs. Thank you Chris.

star star star star star
A group of 5 of us visited london in december and stumbled upon this pub tour on the internet, so we decided to book it. We all agree that this was absolutely one of the top 3 things we did during out 5 days in london. Chris is very knowledgable about the history of london and the variety of pubs that he brings you too. He's up-beat, funny, easy going and takes you through a beautiful walk! Christmas time in london is beautiful and the pubs Chris took us too all participated in the holiday spirit! We all greatly enjoyed the tour and Chris' company.

star star star star star
I bought 2 tickets for the pub tour- one for me and one for my cousin, we are both early to mid 30s. We both thought it was going to be the kind of pub tour where you just drink and get drunk (which can be fun, too!) but what we got in return was way better than we both expected. This was indeed a pub tour, but it was also a history and architectural lesson as well. In between drinks and delicious food, you get a lovely walking tour around the Notting Hill area with information about famous people who have lived (and currently live) there; how the area changed over time and after WW2, and the different styles of architecture that area has (there are many!). Chris is LOVELY- very kind, full of knowledge and funny! We learned about the histories of the various pubs we went to, and had an awesome dinner at the second one (fish and chips FTW). My cousin and I enjoyed ourselves tremendously and would recommend this tour to anyone- couples, singles, friends and young and old as well.
Previous Next
keyboard_arrow_up