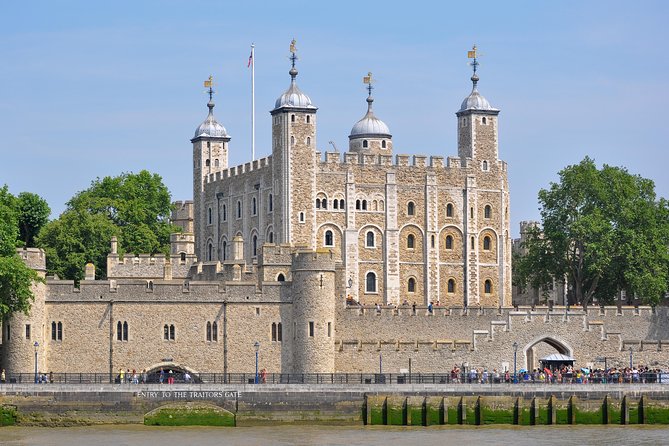 Medieval London: A Self-Guided Audio Tour from Monument to the Tower of London

Put the Tower of London in its often gruesome context on this two mile riverside walk from Monument Station to Traitors’ Gate.

• Spot Roman ruins, find out about the 10 infamous executions here – including Anne Boleyn’s at the hands of an expert swordsman from France – and meet a brazen thief who almost escaped with the Crown Jewels
• Hear from producer James Holdstock, an author of historical fiction set at the Tower
• Do it all a little over an hour or linger at stops along the way with complete control over when you start and finish
• Get unlimited use before your booking date and after it

Once you’ve booked, you’ll receive a ticket with instructions and a unique code listed under “Before You Go”. Then simply install the VoiceMap app and enter your code.

The app displays directions to the starting point, and when you’re in the right place, just pop in your headphones and tap start. VoiceMap has automatic GPS playback, with turn-by-turn directions. It also works offline.

Medieval London: A Self-Guided Audio Tour from Monument to the Tower of London

INR 378
p.p. onwards
Itinerary
This is a typical itinerary for this product

The tour starts here at The Monument which is a Doric column adorned by flames that commemorates the great fire of London and the subsequent rebuilding of the city.

The tour takes you over London Bridge where you learn a bit about it and it's predecessor's history.

From London Bridge you will have a fantastic view of The Shard. It's got 95 floors and was started in 2009 and opened to the public in 2013. It's also been known as the Shard of Glass and London Bridge Tower.

The tour goes along the South Bank of the River Thames.

You'll have a great view of the HMS Belfast and will learn a bit about the ship during this tour.

You'll pass London's City Hall on the tour. It was completed in 2002 and is essentially the Mayor of London's office.

The tour takes you over Tower Bridge where you will learn a bit more about what used to go on at the bridge.

A large part of the tour takes place at the Tower of London where you'll hear about its fascinating history.

The tour takes you through the garden

Confirm time with the local provider in advance of your experience.
Medieval London: A Self-Guided Audio Tour from Monument to the Tower of London
1/1/2021 - 10/12/2023

star
Bad information on the website. It didn't allow us to go inside. Only outside which is useless as we could just walk around for free! If the info was clear I would look for vouchers to go inside. I've end up paying a full price for the tickets. Waste of money...

star star star star
I could stop wherever I wanted and enjoy the view. Also the guide was interesting and gave lots of information.

star star star star star
It was a lovely tour on Halloween night and with a blue moon. Our guide was Sophie and she was a fabulous story teller. Recommended if you like gruesome stories.

star star star star star
One of the best tours in London. I highly recommend everyone to spend money to go here..I think its actually worth the money that you spend for the tour. From the crown jewels to the history and the displays. You learn a lot about the history of London by going here. Please wear comfortable shoes and dress warm - those castles can get pretty cold.
Previous Next
keyboard_arrow_up