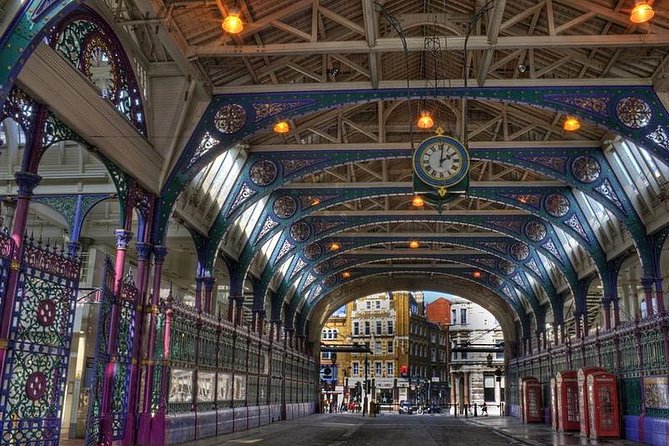 Explore London's past and present on this whimsical journey through Clerkenwell, Farringdon and Smithfield - the hectic hubs of central London. On the journey you'll unearth buried stories, some hidden deep, others lying near the surface. The end of the journey will be the Museum of London, located in the Barbican Estate.

INR 378
p.p. onwards
Itinerary
This is a typical itinerary for this product

You'll have the opportunity to visit the museum after the tour.

The Barbican Centre, which hosts several performance halls, galleries, film theatres, a library, restaurants, conference halls, and informal performance spaces, opened its doors in 1982. The whole Barbican complex is a grade II protected building. It is certainly worth the time to have a walk around this unique place and check out the Arts Centre.

Smithfield is a Victorian-era meat market which provides mostly to local butchers and restaurants. The market opens at 2am and it goes until mid-morning — they recommend stopping by around 7am. It was originally known as Smoothfield, and is the oldest wholesale meat market in the UK; it can be traced back to the early 12th century. Producers from the whole country drive into London at night to sell their produce here — the activity at night is incredibly hectic.

There has been a market here — intermittently — since the 1890s. It takes the name from one of the local pubs, the Exmouth Arms.

This is a memorial dedicated to the memory of William Wallace, the “Scottish patriot”. William Wallace was executed around this very spot. This area used to be known as The Elms, and it is London’s oldest execution spot.

The tour starts outside this pub on a typical London street.

Confirm time with the local provider in advance of your experience.
Clerkenwell, Farringdon & Smithfield: A Self-Guided Audio Tour of London
1/1/2021 - 10/15/2023

star star star
The GPS tracking was brilliant. You can’t get lost! The actual content was thin. We would have liked much more about the history of the area, place names etc. Overall pleasant but not great.

star star star star star
This was a fun tour to do solo, taking just under 60 min, introducing me to some of London’s history. By starting at 7a.m, the park at Spa Fields was still locked and the museum of London only opened at 10, but the bakery in Exmouth market was open and I got a delicious sour cherry and chocolate scone. Smithfield’s meat market was still busy at that time of day. If I had to do it over, I would have started st 8:30 or 9am. The recording includes some disparaging, yet honest, comments about Boris Johnson who was not yet Prime Minister at the time of recording and might want to be adjusted.
Previous Next
keyboard_arrow_up