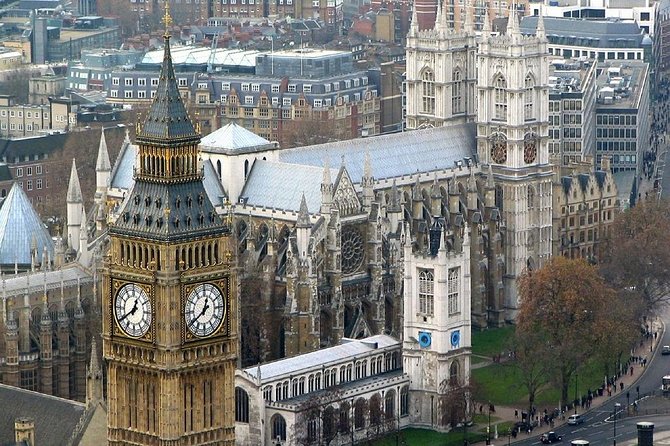 You may be familiar to the most famous sights of London, but are you familiar with the history, stories and characters behind them? This tour takes in a range of central London's most iconic spots, ideal for plenty of photo ops whilst allowing you to learn the hidden histories behind famous buildings.

Throughout, you'll be rewarded with plenty of facts and trivia that are guaranteed to shed new light on parts of London you thought you knew.  This is a stair-free route through the streets of London suitable for wheelchair users.


INR 373
p.p. onwards
Itinerary
This is a typical itinerary for this product

Queen Victoria was the first ruler to call Buckingham Palace her official residence in 1837. She oversaw huge changes to the "tiny" palace, including new wings and ballrooms, as well as the installation of gas lights, and then electricity in 1887.

St James' Palace is the most senior royal palace in the United Kingdom. Although it's no longer the main living space of the monarch, it is the formal gathering spot of the Accession Council and the London residence of some minor members of the royal family.

St Paul’s Cathedral has been there for over 300 years. It was designed by Sir Christopher Wren, and was just one of the 52 churches he built after the Great Fire of London in 1666.

The 18ft tall statue of Nelson in Trafalgar Square has stood atop its column since 1854, looking towards the Houses of Parliament.This statue is commonly said to be the very centre of London! It took fifteen years to construct.

Westminster Abbey is where all the kings and queens of this country have been crowned, from William the Conqueror in 1066, to our current Queen Elizabeth II in 1953. A large number of monarchs are also buried here, so it's where their reign begins and ends.

The build-up of the plot to blow up Parliament began with Queen Elizabeth I, who came to the throne in 1558. She ran Protestant England, and effectively made Catholicism illegal. If you didn’t go to church and take the oath of Supremacy to the Queen, you were charged with treason.

Did you know that the tower itself is not actually named Big Ben? For most of its life it had the very functional, very Victorian name of ‘Clock Tower’. And then, in commemoration of the Queen’s Diamond Jubilee in 2012, it was renamed ‘Elizabeth Tower’. So how then did this clock tower come to be known as Big Ben? The name actually refers to the bell inside the clock tower.

At 135 metres high, the London Eye it’s the biggest Ferris wheel in Europe. Every component of the wheel had to be designed and built from scratch and floated up the Thames on barges, assembled flat on piled platforms in the river.

Confirm time with the local provider in advance of your experience.
Classic Sights and Hidden Histories London Self-guided Audio Tour by VoiceMap
1/1/2021 - 10/12/2023