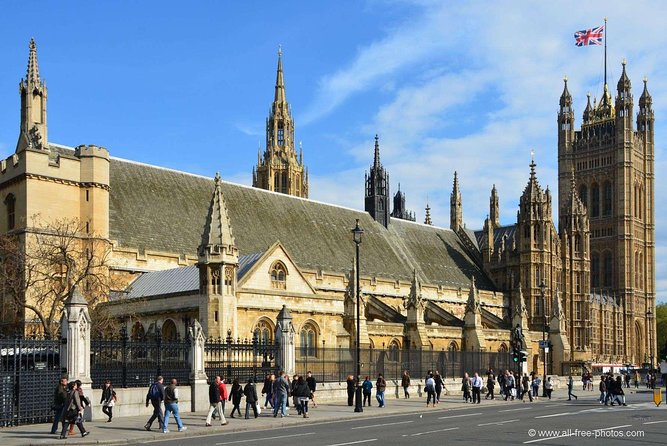 This walk covers the great palaces of the monarchs and the Archbishop of Canterbury. We walk from the Golden Jubilee Bridge through Whitehall Gardens to the Banqueting House in Whitehall, the last remaining building from the ancient Palace of Whitehall.
From there we walk along the Thames with views of the London Eye and Westminster Bridge, before seeing Parliament Square, the Houses of Parliament and Westrminster Abbey. The walk ends passing the famous Burghers of Calais sculpture by Rodin on to Lambeth Bridge and Lambeth Palace, the London home of the Archbishop of Canterbury.
The tour is ready whenever you are and the audio plays automatically at exactly the right time and place using your smartphone's GPS and the VoiceMap mobile app, which also works offline.

INR 373
p.p. onwards
Itinerary
This is a typical itinerary for this product

Banqueting House is the most impressive remaining building of the ancient Palace of Whitehall. The architect was Inigo Jones, who built it for King James I in the Palladian style in the early 1600s.

The Royal Air Force Memorial commemorates the air-force men and women who lost their lives in World War 1. You can read the RAF motto at the top - Per ardua ad astra, meaning 'through struggle to the stars'.

The original Westminster Bridge was opened in 1753. Until that time, London Bridge was the only way of crossing the Thames, except for the many ferries.

You will see statues of some famous people at Parliament Square. On the corner of the square is a statue of Winston Churchill, who led Britain in the Second World War.

This tower was built in 1365 by Henry Yevele, who also reconstructed Westminster Hall. It is made of Kentish Ragstone and has three storeys. It used to be surrounded by a moat where fish could be caught.

Lambeth Palace is the London home of the Archbishops of Canterbury. Archbishop Baldwin took over the manor in the 1200s, when he realised it was essential to have ready access to the monarch.

This walk covers the great palaces of the monarchs and the Archbishop of Canterbury.

Confirm time with the local provider in advance of your experience.
Westminster Heart of the Nation Walking Audio Tour
1/1/2021 - 10/14/2023

star star star star star
This audio tour is terrific! A great way to orient yourself and learn about the various monuments and gardens along the way without being exhausting. I would allow more than one hour if you want to stop to take pictures.