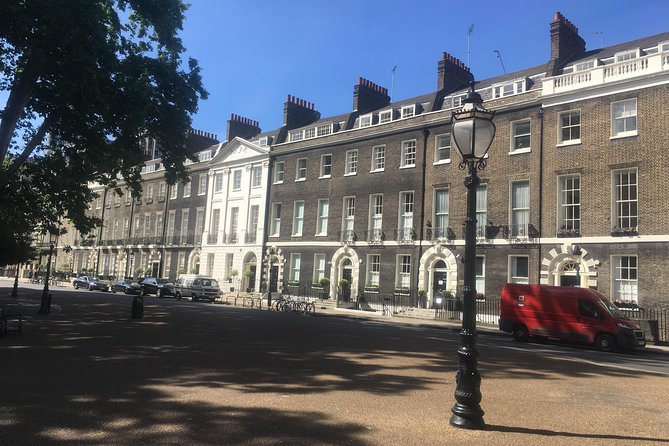 Encounter literary greats like WB Yeats, T S Eliot and George Bernhard Shaw, on a walk that starts with the architecturally spectacular Fitzrovia, named after a descendant of Charles II and his mistress, Barbara Villiers.

It's just a stone's throw from Tottenham Court Road, where you'll visit the cosy English pub where Dylan Thomas met his wife, and explore Bloomsbury, where members of the ground-breaking Bloomsbury Group like Virginia Woolf lived and worked. Passing Georgian squares, we'll make our way to two of London's greatest intellectual and cultural institutions, London University and the British Museum, before ending our walk in a charming Dickensian alleyway.


INR 476
p.p. onwards
Itinerary
This is a typical itinerary for this product

The buildings around Fitzroy Square were designed by Robert Adam, the famous Scottish architect. It's one of London's most attractive squares, with a Key Garden in the centre. This is accessible to people living on the square, who have the right to hold a key.

Bedford Square is one of the earliest and best preserved London Squares. It was developed by Thomas Leverton in 1775 for the Duke of Bedford who owned all the land around Bloomsbury. The freehold still belongs to the Bedford Estate.

The British Museum was founded in the 18th century, but the present building dates from the 1840s and later. Robert Smirke designed the main building, including the famous 'Reading Room' where Karl Marx wrote 'Das Kapital'.

Russell Square is one of London's largest squares. The original buildings surrounding it were constructed in the early 1800s, in the Georgian classical style. The architect was James Burton, who employed the famous landscape gardener, Humphrey Repton, to design the gardens.

Tavistock Square was developed at the same time as Gordon Square. There's a statue in the middle of the square. This is of Mahatma Gandhi, who studied in London University.

Woburn Walk was designed by architect Thomas Cubitt in 1822 as a pedestrian street. It was in fact London’s first purpose-built pedestrianized shopping street. Much of the architecture has been preserved, including the Dickensian bow-fronted buildings.

star star star star star
A delightful tour of some fascinating parts of London with a real expert on the audio guide bringing it all to life. Brian’s voice goes with you with clear explanations, amusing anecdotes and really interesting facts. A really great way to explore London. I loved it! Highly recommended.
Previous Next
keyboard_arrow_up