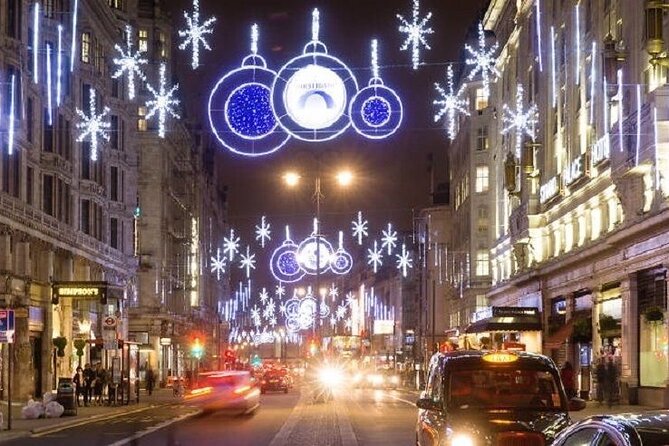 There is nothing like the sparkle of London’s famous Christmas decorations to give our city an instant makeover! Regent Street (since 1948) and Oxford Street (since 1959) both have spectacular Christmas light shows! In more recent decades Marylebone High Street, Bond Street, Carnaby Street, Seven Dials and Covent Garden are all festooned with thousands of lights and giant baubles!

What better way than to soak in our winter light festival than with one of our accredited London tour guides – all great storytellers of history, culture, movie site locations, ghosts and secrets! Christmas lights have been a feature of London for over half a century, their colours and designs add a truly wonderful fairy-tale fantasy.

The perfect option for private touring or a special gift – so make up for lost time, anniversaries and experiences this year, and give the gift of safe-sightseeing this Christmas!

INR 22,057
p.p. onwards
Itinerary
This is a typical itinerary for this product

There has been a spectacular Christmas Lights show in Regent Street since 1947.

The festive lights have been on London’s famous Oxford Street since 1959.

Marylebone Village is always provides a sparkle in our Christmas Lights Tour.

The illuminations here are often supported by roaming gospel choirs or other festive street performers.

This year’s stunning festive display include pink neon lights from light boxes that run the length of the street, and a perfect location for a short walkabout.

Always a favourite, which includes a huge 60’ Christmas tree!

The huge 80’ Norwegian spruce Christmas tree has been a London tradition since 1947, a gift from Norway for British support during World War 2.

The North Bank Christmas Lights have become a very popular inclusion on our festive season activity.

Home of the Queen of England - floodlit at night time!

This one is lit up all year round!

More Christmas Lights in this location of grandeur.

Some extra light shows are on display in this neighbourhood.

Embankment, Villiers St, London WC2N 6NS, UK
Traveler pickup is offered
We offer hotel pick up from any Central London location within a 5 km radius.
If your hotel is outside this area, the recommended meeting point where we will pick you up is Embankment Tube Station.

star star star star star
Every step of our London Christmas Lights tour with Black Cab Heritage Tours was an excellent experience. I would definitely use them again. Rob Woodford, who kindly helped us with all the information and booking was very quick to respond and very helpful and accommodating throughout the process even when we needed to change the date due to unforeseen circumstances. Barry Ivens, our tour host and guide was funny, informative, and very very enthusiastic. He really went out of his way to make sure we had the best experience and we got to see the best and most places. He took us to lots of interesting places including quite a few hidden/less known spots. He shared interesting information throughout the tour. And he was kind to take plenty of photos throughout the evening. We really had a great time! The electric black cab was very spacious, the glass roof was brilliant to view the Christmas lights. Thank you Barry and Rob for our wonderful experience!

star star star star star
We had a magical tour of the Christmas lights with Andy! He was very accommodating and extremely knowledgeable. He was great with my two children aged 5 and 6 and also my parents. We had a fantastic evening and saw lights we would not have known about without him. Good mix of in and out of the cab! We would certainly do it again!

star star star star star
Mark went above and beyond to provide a truly delightful and informative tour! He helped us access the Christmas light from angles we would not have known about as tourists. Stellar experience!

star star star star star
We went on a Christmas lights tour. Our guide Stella was delightful and very clever at working through the traffic so that we could see the wonderful displays. She was also quite knowledgeable about the history and famous figures, and shared a variety of stories. We highly recommend this company. They communicated promptly, made the booking process easy, and exceeded our expectations!

star star star star star
Wonderful night with family sightseeing the London Christmas Lights and attractions and special thanks to driver / guide Rachel and office staff at Black Cab Heritage Tours for making sure all the arrangements were so easy. Rachel was a great host and added to the whole experience with her EV cab decorated with lights and Bluetooth speaker for our Christmas songs! We are all planning some more visits to London based on some of the “hidden gems” discovered and recommendations from Rachel.

star star star star star
From start to finish we had an incredible time. Rachel was incredibly knowledgable, kind, caring and the warmest guide around London we could have asked for. Engaging with our 3 year old with utmost enthusiasm and ensuring our safety every step of the way. We saw all the Christmas lights off the beaten track around central London and even got all the background information on each light setup as well as history of London. Rachel is clearly incredibly knowledgable and enthusiastic about the history of London. She was incredibly accommodating with our movements for pick up and drop off and even bought our boy a selection box as a little magical treat!

star star star star star
We absolutely loved our Christmas Lights tour with Dennis, he was knowledgeable, responded to requests from the children, showed us a load of places I don't think we would have seen otherwise and took loads of family photos of us too! We also loved the panoramic roof. Seeing the lights in this way was a much more relaxing experience than other options, highly recommended!

star star star star star
It was a stunning tour, with Bill as our driver and guide, showing himself to be extremely chatty and very knowledgeable. The experience was well planned allowing us time to stop, have short discussions and take pictures too. Although we have been to London before, this was certainly one of our top tour experiences. We are definitely going to opt in to a number of other excursions that are on offer. If other guides are of the calibre of the outstanding Bill, we are surely in for a treat!
Previous Next
keyboard_arrow_up