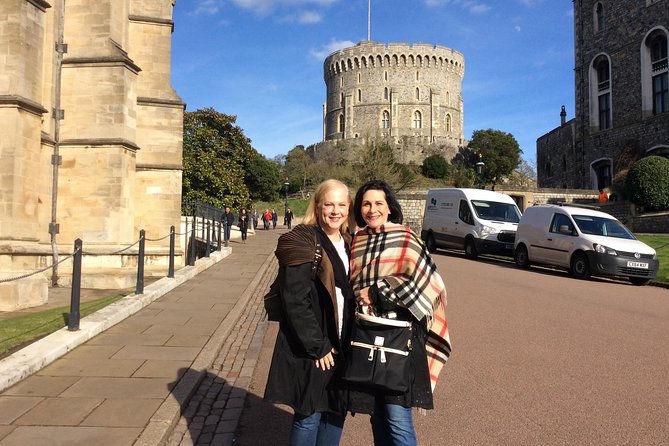 Just 60 minutes from Central London into the wow-wonderland of Windsor-on-Thames. The King of England has made it his new home…and yes, it’s worth all the fuss. We stop at Runnymede Field where King John signed the Magna Carta in 1215, the big daddy of constitutions worldwide
A guided walking tour, followed by a caffeine fix at an atmospheric English cafe, and jaw-dropping moments at the official residence of His Majesty. There’s still St. George’s Chapel, tombs of many of English Kings and Queens, including the late Queen Elizabeth II, and the venue of the celeb-wedding of Harry and Meghan.
A lunch table at a relaxing riverside restaurant or maybe you prefer a traditional afternoon tearoom in the village?
Free time to visit Eton College, where 13 British Prime Ministers and Princes William and Harry studied, enjoy some shop browsing, or stroll along the River Thames.
Useful tip. Save the hassle of long lines by pre-ordering your Windsor Castle skip the tickets with us.

INR 38,241
p.p. onwards
Itinerary
This is a typical itinerary for this product

Castle origins date back to the 11th-Century Norman Conquest - used by The Crown and is the occupied palace in Europe.

Where Prince Harry and Meghan Markle were recently married in a special space of 15th-Century medieval Gothic splendour.

Windsor Great Park is a Royal Park - its present area determined in the 1360s and was popular with Saxon kings as a hunting forest.

Quaint riverside setting in the Royal County of Berkshire - and home to Her Majesty the Queen.

Discover a hidden secret about this building’s architecture - and its the venue for the marriages of Charles and Camilla plus Elton John and David Furnish.

Edwardian theatre near the banks of the River Thames - your Guide will have some amusing anecdotes at this stop.

Tiny village bound by the River Thames to the east and Windsor Great Park to the west.

Site of the signing of the Magna Carta in 1215 - managed by the National Trust.

Emotive acre of English ground given to the USA by the British people in memory of President John F Kennedy.

Memorial erected by the American Bar Association - nestled in a quiet spot near the meadows alongside the River Thames.

Moving memorial inscribed with the names of over 20,000 men and women of the Allied Air Forces who lost their lives in World War Two on missions and have no known grave.

One of England's longest waterways which meanders through the Royal County of Berkshire and the Windsor neighbourhood.

Founded in the 15th-Century this world-renowned College has educated 20 British Prime Ministers and numerous members of the aristocracy including Prince William and Prince Harry.

Historic old town on the opposite bank of the River Thames to Windsor.

Traveler pickup is offered
We offer hotel pick up from any Central London location within a 5 km radius.

star star star star star
We loved our tour of Eton and Windsor. Paul was so knowledgeable and his warm demeanor made the day incredible. He managed to get us into the Doll House which is not open to the public.

star star star star star
My family had a wonderful time in Windsor. The town and the castle were great. Loved walking over the Thames into Eaton. David was our driver and he was extremely personable and knowledgeable. He made the day so much better. While this is a very pricey way to see Windsor,, we thought it was worth it.

star star star star star
Chris gave us a fabulous day at Windsor. Right from the start he was very accommodating. My husband’s flight was delayed and he altered our start time to accommodate. He is incredibly knowledgeable and gave us a wealth of information on Windsor, the monarchy, and all things British. He was incredibly thoughtful to my 84 year old mother’s needs and adjusted the tour to accommodate her capabilities. We thoroughly enjoyed our day with him and would highly recommend Chris and Black Cab Heritage tours.

star star star star star
We had a fantastic day with Mick at Windsor and Eton. He is incredibly knowledgeable and personable, sharing lots of historical anecdotes about these storied locations. He also took us to Runnymede, site of the signing of the Magna Carta. Thank you for a wonderful day!

star star star star star
We had an amazing tour of Windsor with Barry -- one of the awesome tour guides from Black Cab Heritage (In previous years we have toured London and Stone Henge/Lacock/Bath with Craig who is also great!) We had been in Wales on a trip and then arrived in London and dropped out rental car off at the airport. Barry picked us up at the rental car place and took us on the Windsor tour and dropped us at our AirBnB at the end of the day. This was the last day Windsor was open before closing down for Covid-19 lockdown. We had the 'luck' of having a lot of the places to ourselves and Barry was very informative and fun to talk to and learn from. I highly recommend Black Cab Heritage if you are in London and looking to do some excursions or even get around town. You don't have to think about driving or the details of when and where you are going, and the tour guide/drivers are all excellent at what they do! We will be doing other tours with them in the future.

star star star star star
We hired a car and driver for a private tour to Windsor and were very pleased with the experience. Our driver Mark was excellent, he was very informative with an awesome sense of humor. Mark made us reservations at a wonderful riverside restaurant and stopped so we could share a pint at a quaint local pub. Our kids still talk about this trip with Mark. I would highly recommend hiring Black Cab Heritage for anyone wanting a uniquely British experience.

star star star star star
I had a 5 hour layover in London, and no other company was willing to give us a tour with that amount of time, but this company did! Our Tour guide Moses was extremely knowledgable, and gave us amazing insights into the beauty of London! We stopped such awesome places! Moses was on time, and waiting for us right as we exited the airport. If you are looking for a tour guide in London, I Cannot recommend this company enough! THE BEST! Cant wait to come back to London and tour for longer! -Drew

star star star star star
Terrific day at Windsor for our family that includes a 15yo boy. Our guide/driver was Moses and he was fabulous in every way. He bonded with my teenage son and made sure we were comfortable and having fun. Took us to the Windsor Farm Market and around the town of Windsor. Dropped us off at a market in London near our hotel and arranged car service for us the next day to LHR

star star star star star
My wife and I did a Windsor day excursion tour from London today. An amazing tour of Windsor Castle - especially St George’s Chapel - very special. A must do if you are visiting London . Chris our tour guide / driver was great - very professional, knowledgeable and friendly. Thanks Chris for making it a memorable tour.
Previous Next
keyboard_arrow_up