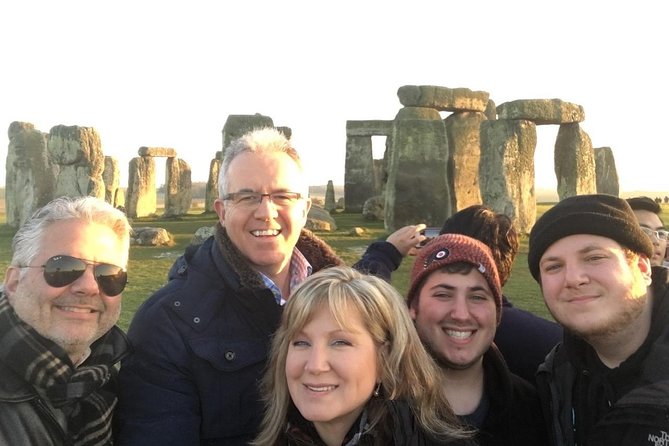 Dive right into the English Countryside to gloat at 2 mega UNESCO World Heritage Sites of Stonehenge and Salisbury Cathedral. Stand at the pre-historic circle of gigantic stones at Stonehenge and give yourself a moment…or several. Draw up your own theories…try figuring it out. Historians have been scratching their heads to decode its mysteries since years. Then hang out in the fabulous museum of the new visitor centre. Get theatrical during the short drive to Salisbury Cathedral. Shakespeare sure lived a good life out here. There’s a surprise in store at the 13th-century Gothic masterpiece. Neck craning in order at the tallest spire in Great Britain. In the esteemed company of the Magna Carta, signed back in 1215, mull over this. Democracy made a debut right here. So how about the oldest working medieval clock in the world? End with tea in a pretty glass-roofed refectory under the 400-foot spire. Pre-order and pre-purchase your skip-the-line tickets to Stonehenge with us.

GBP 405
p.p. onwards
Itinerary
This is a typical itinerary for this product

Accredited Private Driver Guide to provide a panoramic sightseeing tour with a running commentary punctuated by stops for stand up presentations.

Rural English countryside characterised by its high downland and wide valleys - plus the famous Salisbury Plain.

Enjoy our guided walk around this medieval cathedral city.

Regarded as the finest example of Early English architecture - which is also home to the best surviving of the 4 original copies of the Magna Carta which is over 750 years old.

One of the greatest marvels of pre-historic Britain!

Lunch option can be taken at the Red Lion Pub - with its ghost inhabitants!

Explore the story of the oldest continually inhabited settlement in Great Britain - plus the quintessentially English Tearoom is in the quaint old Library.

Atmospheric Neolithic Site - believed to be a burial mound constructed around 2,300 BC.

star star star star star
We looked at several tours that went to more sites but wanted to take our time. This tour was just right. Mick picked us up promptly for our hotel and drove us out to Salisbury to see the cathedral. He walked around with us without being overbearing and let us go at our leisure. Always around if we had questions. Afterwards he found a terrific pub for us to enjoy lunch and then on to Stonehenge. Afterwards he drove us the 2 hours back to central London while we napped. Terrific day and fantastic guide.

star star star star star
Amazing tour! Our tour guide Barry was just awesome. So full of knowledge and did everything possible to provide us with comfort. I learn so much in this tour about the history of the sites we got to visit. A must for anyone who travels to London.
Previous Next
keyboard_arrow_up