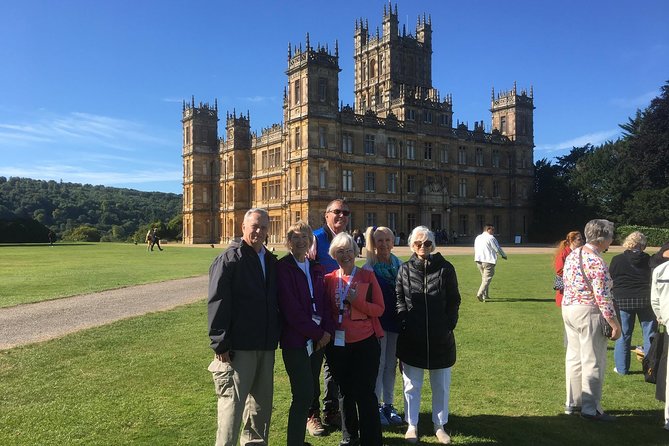 Downton Abbey fans - hog the attention of your historian guide all the way, but keep your eyes peeled for the sights of the Cotswolds, an area of Outstanding Natural Beauty. Sheep-studded hills, rural farmsteads, blues skies.
Highclere Castle (Downton Abbey, the Grantham family home) only available certain times of the year.
Please pre-purchase your tickets before reserving this tour.
When the castle is closed to the public or sold out we can still take in the view from the grounds.
Downton devotes will find ye ancient market town of Bampton familiar - Downton Church, Downton Cottage Hospital, Grantham Arms pub. Peek into every alley in this charming hamlet.
Daydream awhile over lunch at the riverside Swan Inn in Swinbrook village. Next stop is Cogges and its historic manor house (Downton Abbey’s Yew Tree Farm). Linger at Shilton’s 18th-century humped-back bridge next to a bubbling brook.

INR 42,474
p.p. onwards
Itinerary
This is a typical itinerary for this product

Charming Cotswolds village which doubles up as the fictional Yorkshire village of Downton.

Discover where Lady Edith was jilted at the altar!

Picturesque Cotswolds village where Lady Sybil and Branson planned their elopement in an idyllic Cotswolds pub.

Cotswolds village with a particularly tranquil setting where a ford crosses a bubbling brook - and where the Old Forge building was transformed into the Red Lion pub where Mr. Bates found work after leaving Downton Abbey.

West Oxfordshire in the Cotswolds has some of the most picturesque sightseeing in England - undulating hills, rural agriculture, quaint villages and hamlets, honey-coloured limestone cottages, thatched roofing and dry stone walls - it's beautiful!

Historical market town referred to as the 'Gateway to the Cotswolds'.

star star star star star
This is a Excellent Company to do business with! Rob Woodford .. promptly responded to me and what I was looking for.. I booked 3 Private tours… A full day tour to the Cotswolds, including Blenheim Castle, Downton Abbey Town used in Series, Other Cotswold towns… Bill (William) Berry was our Tour Guide.. He contacted us ahead and introduced himself… very professional and He is wonderful.. We can’t say enough about him… We felt we knew him forever! Just the best! He can come and visit us anytime! He also did our Windsor tour the next day.. loved him! Sunday we did the Beatles & some Rock & Roll tour with Mick Greenwood.. equally as wonderful! Had a great time and learned a lot.. my husband is a great Beatles fan .. we both are of that time! This is a very professional group and most enjoyable and warm people! Thank You Rob💕 Thank You Bill💕 Thank You Mick💕 Look no further for tours!

star star star star star
Can't say enough good about this tour and our tour guide, Barry. It was so nice to have someone who knows the area and can take pictures for us! I also have to mention and specially thank Rob Woodford who helped organize the excursion. When originally booked, there were no more tickets (end of season) for Highclere Castle tour. But through Rob's direct contact to the castle and influence we were able to secure tickets. Thanks Rob! We will always remember this trip with fond memories! Thank you!!!

star star star star star
Our driver was Barry. He was GREAT. We stopped all along the way and he took photos and really became our friend for the day. We stopped at sites in London, Highclere castle, and several other location stops where we enjoyed the day. We enjoyed snacks sitting in the shade at Highclere. He took us to the well hidden restaurant (it was Monday so the Pubs were mostly closed) - guess I shouldn’t mention where. Don’t want to spoil the secret. Anyway, it was a great day. THANK YOU BARRY!
Previous Next
keyboard_arrow_up