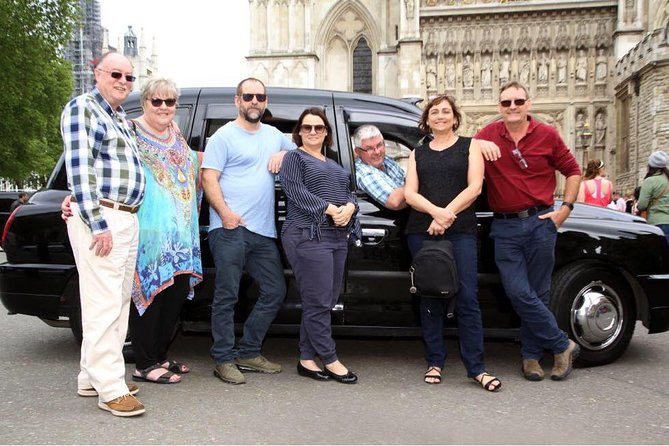 INR 40,531
p.p. onwards
Itinerary
This is a typical itinerary for this product

Taking a Tour of London in an iconic London Black Cab is a visitor attraction in itself!

Get close up to the London residence of Her Majesty the Queen of England!

The heart of British democracy.

Probably the most famous clock face in the world!

A place of Royal marriages and burials - and where every coronation has taken place for 1,000 years.

An iconic London landmark which contains the House of Parliament.

The Prime Minister of Great Britain lives at Number 10.

The site of the public execution of King Charles 1 in 1649.

Classic building in the heart of Westminster.

Government buildings on a street which shaped a nation.

We shall see the Horse Guard Change of the Queen’s mounted regiment.

The exact centre of London.

One of 4 Royal Parks in the centre of London.

An instillation to celebrate the new Millennium is now a permanent and popular attraction alongside the River Thames.

Magnificent baroque Church the masterpiece built by the great Sir Christopher Wren after the Great Fire of London.

One of London’s only Medieval Great Halls.

Some culture - but also a surprising 2,000 year old discovery in the basement.

The country’s gold reserves are secured in this impressive stronghold.

Architectural gem and home of the Lord Mayor of London.

Commemorates a conflagration that destroyed 5/6 of the City in 1666.

Victorian market which will appeal to fans of Harry Potter.

This neighbourhood is in ‘Jack the Ripper territory’.

Fortress and Royal Palace and now the keeper of the Crown Jewels.

Perhaps the world’s most iconic bridge!

The first ever crossing of the famous River Thames happened near this spot 2,000 years ago.

High quality street food and speciality coffee under one roof.

Home of our old newspaper industry and the Demon Barber Sweeney Todd immortalised by Johnny Depp in a Hollywood blockbuster slasher movie.

Some of the world's greatest Art - and surprise in store if you are a fan of 007 agent James Bond!

Impressive sculpture in the foreground of Buckingham Palace.

Piccadilly icon which is the heartbeat of London.

Home of many of London's flagship department stores.

Neighbourhood of the most expensive real estate in London.

Designer stores line the street of this well-to-do location.

London icon - which once sat in front of Buckingham Palace.

Gilded sculpture to commemorate Prince Albert consort to Queen Victoria - for his commitment to London's Great Exhibition of 1851.

Henry VIII's Tudor Palace - and place to witness a detachment of troops heading for the Changing of the Guard Ceremony.

London residence of Charles, Prince of Wales - this street was used in the filming of 'The Crown'.

Every day in summer and 4 times weekly the rest of the year - its pure British pomp and ceremony!

Embankment, Villiers St, London WC2N 6NS, UK
Traveler pickup is offered
If your hotel is outside of Central London OR if you don't provide your hotel information, the recommended meeting point where we will pick you up is Embankment Tube Station.

star star star star star
We thoroughly enjoyed our Full Day Private Tour with our driver/guide, Tracey. We saw so many highlights of London. Tracey was very knowledgeable and personable - exceeding our expectations for this tour.

star star star star star
This was a great way to see London when you have only one day. Mark Moreton was the best guide and a great companion! He made sure we saw all the highlights. Best tour I have ever been on.

star star star star star
Our full day taxi tour with Mark was exceptional!! He was funny, knowledgeable, agreeable and a all around great guy. He went above and beyond even stopping at a market so we could buy snacks and wine. One major bonus with using a taxi tour guide is they can park nearly anywhere. This is major in a city like London. Really can not recommend it enough. 10 stars!

star star star star star
Took in today the private Black Cab Heritage Tour of London. The iconic black cab was very spacious, and though it could roomily hold 5, touring solo was like having a VIP tour of the city. And Craig was THE perfect host, driver and tour guide, truly making me feel like a VIP, as he regaled me with stories that left me gobsmacked. We saw the usual sites (The London Eye, Big Ben, Buckingham Palace, Tower of London, Westminster Abbey etc.), but it was when we visited shops steeped in history, along with his captivating tales, which made the outing very special—visiting hidden gems such as John Lobb, bespoke footwear maker to the Prince of Wales; Lick and Co. Hatters, tailor made hats (like Oddjob’s bowler hat) for the James Bond films, and Robert Lewis, cigar merchant to Winston Churchill. The anecdotes were fascinating from both Craig and the shop staff. It was a full-on 7 hour day, which flew by and never felt stale or boring. Craig was always amenable to whatever I want to see that wasn’t part of the tour, which was icing on the cake. It was truly a memorable experience, which I highly recommend. Thanks again Craig for an unforgettable, personalized tour of London.

star star star star star
Excellent! Worth every penny! We skipped lunch and got to see so much more. 7 hours of fun and history. Loved every minute of it! Great for fist time London visitors.

star star star star star
My family and I spent 8 hours today with there driver, Mark. He went above and beyond teaching us everything we wanted to know as well as answered every question we had. He was absolutely astounding. He was safe, kind, and truly helpful. It was the highlight of our time in London.

star star star star star
Mark Moreton was a wonderful guide and great companion. We spent the day with him in London and saw so many sites. I would definitely hire him again for any tour In England.

star star star star star
Our tour guide was Antony, and we could not have had a better experience. Antony was very informative, flexible with the groups needs, and made us feel right at home while on vacation. We were very impressed with how prepared Antony was, especially with all of the current historic events. Overall, I would recommend this group to anyone and hope you have the same quality of tour as us!

star star star star star
Best. Tour. EVER. Tony was fantastic! We felt like we were spending the day with a good friend, not someone we just met. We had an absolute blast. The tour was a great blend of driving and walking. Our tour went over 7 hours, but the day flew by. We could have gone for 12 and not realized it. Everyone needs to do this tour!

star star star star star
We had the most wonderful day from beginning to end with Antony!! He was well informed, fun and accommodating! We know we saw and learned things we never would have without him. His electric cab was so spacious and had huge windows making it easy to take in everything. He took us to a wonderful restaurant for lunch on the Thames. This full day tour is the only way to start your stay in London and it is made more entertaining with Antony!
Previous Next
keyboard_arrow_up