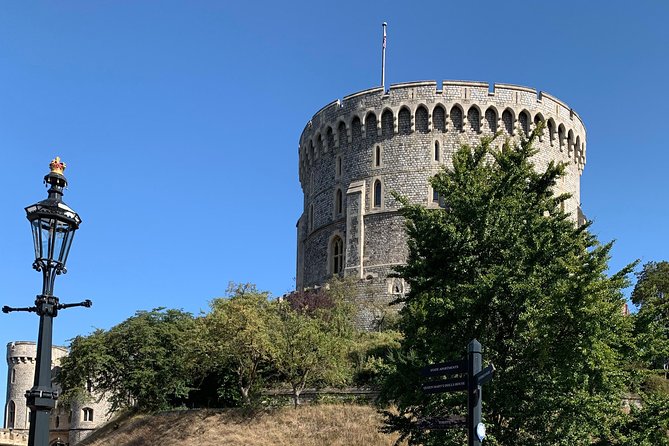 You will be collected and returned from a pre arranged Central London location, at a time of your choice, in an air conditioned Iconic London taxi.

We shall commence the driving tour in London, with plenty of opportunity to stop, get out and get those all important photo's at the locations which will include but not limited to
Buckingham Palace
St James's Palace
Kensington Palace
Tower of London
St Pauls
Westminster Abbey

We will then head out of town to the Royal Borough of Windsor and That Castle! the Family home to the British Royal Family
a Royal Residence to no fewer than 39 British Monarchs and the oldest Royal Residence in the British Isles to be in continous use,

At the end of the day you shall be returned to either your hotel or Central London location of your choice.

INR 50,338
p.p. onwards
Itinerary
This is a typical itinerary for this product

Buckingham Palace has served as the official London residence of the UK’s sovereigns since 1837 and today is the administrative headquarters of the Monarch.
Today, Buckingham Palace is very much a working building and the centrepiece of the UK’s constitutional monarchy, it serves as the venue for many royal events and ceremonies from entertaining foreign Head of States to celebrating achievement at Investitures and receptions.

St. James's Palace has been the setting for some of the most important events in Royal history, having been a residence of Kings and Queens of England for over 300 years until the reign of Queen Victoria.

The original and official entrance to both St James’s Palace and Buckingham Palace.  A Guard is mounted here by members of the Household Cavalry, either the Blues and Royal or the Lifeguards (Kings Troop in July) – the Guard Changes 11am daily.  There is a Guard inspection at 4pm every afternoon – simply because when Queen Victoria paid a visit at the same time one afternoon, she discovered a Guard pissed and slumped over a barrel of beer  Until the late 19th Century Horseguards was also the HQ of the British Army, and remains today the official HQ for Army units based in London.  Note the ‘Number 2’ on the clock above the archway has a black mark beside it - this is in recognition of the Execution of Charles 1, who was beheaded at 2:10pm on the 30th January 1649, opposite this spot outside the Banqueting House.  It is a unique clock face with Roman numerals circled by decimal numbers so that the time of 2:10pm can be highlighted.

The Abbey has been the coronation church since 1066, and is the final resting place of 17 monarchs, as well as the scene of 16 Royal weddings. The church we see today was begun by Henry III in 1245. It’s one of the most important Gothic buildings in the country, and has the medieval shrine of an Anglo-Saxon saint at its heart.
Today it is still a church dedicated to regular worship and to the celebration of great events in the life of the nation. Neither a cathedral nor a parish church, Westminster Abbey (or the Collegiate Church of St Peter, Westminster to give it its correct title) is a "Royal Peculiar" under the jurisdiction of a Dean and Chapter, subject only to the Sovereign and not to any archbishop or bishop.

The Palace of Westminster, to give it its official name, serves as the meeting place for both the House of Commons and the House of Lords, the two houses of the Parliament of the United Kingdom.
Both Houses work on behalf of UK citizens to check and challenge the work of Government, make and shape effective laws, and debate/make decisions on the big issues of the day.

Home to numerous Royals, and often referred to as the Royal nursery. The focal point of a nations mourning for Princess Diana

For more than 1,400 years, a Cathedral dedicated to St Paul has stood at the highest point in the City.
Frequently at the centre of national events, traditions have been observed here and radical new ideas have found expression under the iconic dome. In many cases these events have left some physical record as well as echoes in the intangible memory of the building.
The present Cathedral, the masterpiece of Britain's most famous architect Sir Christopher Wren, is at least the fourth to have stood on the site. It was built after its predecessor was destroyed in the Great Fire of London in 1666, and services began in 1697.
This was the first Cathedral to be built after the English Reformation in the sixteenth-century, when Henry VIII removed the Church of England from the jurisdiction of the Pope and the Crown took control of the life of the church.

A Palace, a Prison, a place of Execution! An Armoury, an Observatory, and a Royal Zoo.
3 Queens of England lost their heads here - Anne Boleyn, Catherine Howard and Lady Jane Grey.
The Tower is where the Crown Jewels are kept (used in all coronations of our Kings and  Queens).

star star star star star
Paul was a wonderful guide! So knowledgeable and easy going! He was flexible and tailored our day to what ever we wished to do! We’ll worth the expense!
Previous Next
keyboard_arrow_up