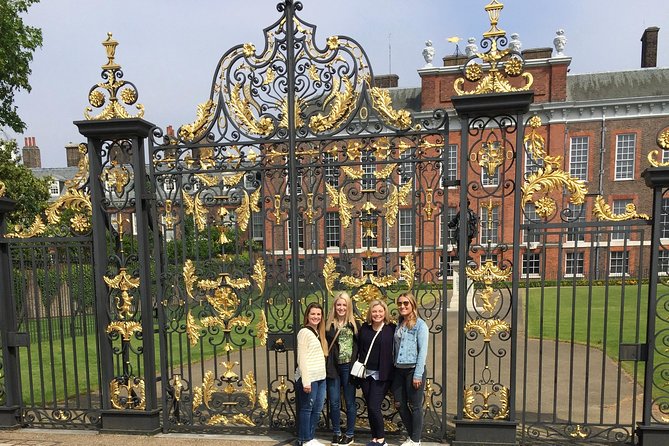 See all the iconic sights of London and more from the comfort of one of the Capitals biggest and instantly recognisable icons, a London Black Cab!
With your full day private tour we will travel through time going back to the city's Roman roots, through the Medieval period right up to the modern day, taking in the major sights of St. Pauls, Tower of London, Houses of Parliament, Westminster Abbey, Buckingham Palace plus some lesser known places.

Take some time out to have a break in a traditional London pub, some dating back to the 17th Century.

Throughout the whole tour my aim will be to keep everything light hearted, fun and memorable on each of the places we visit.

We will not be confined to the taxi, and as opportunities arise, we can always stop for those much wanted photo opportunities and at times perhaps a small stroll to the more advantageous spots.

INR 40,588
p.p. onwards
Itinerary
This is a typical itinerary for this product

Buckingham Palace has served as the official London residence of the UK’s sovereigns since 1837 and today is the administrative headquarters of the Monarch.
Today, Buckingham Palace is very much a working building and the centrepiece of the UK’s constitutional monarchy, it serves as the venue for many royal events and ceremonies from entertaining foreign Head of States to celebrating achievement at Investitures and receptions.

Home to numerous Royals, and often referred to as the royal nursery. The focal point of a nations mourning for Princess Diana

St. James's Palace has been the setting for some of the most important events in Royal history, having been a residence of Kings and Queens of England for over 300 years until the reign of Queen Victoria.

The Palace of Westminster, to give it its official name, serves as the meeting place for both the House of Commons and the House of Lords, the two houses of the Parliament of the United Kingdom.
Both Houses work on behalf of UK citizens to check and challenge the work of Government, make and shape effective laws, and debate/make decisions on the big issues of the day.

The Abbey has been the coronation church since 1066, and is the final resting place of 17 monarchs, as well as the scene of 16 Royal weddings. The church we see today was begun by Henry III in 1245. It’s one of the most important Gothic buildings in the country, and has the medieval shrine of an Anglo-Saxon saint at its heart.
Today it is still a church dedicated to regular worship and to the celebration of great events in the life of the nation. Neither a cathedral nor a parish church, Westminster Abbey (or the Collegiate Church of St Peter, Westminster to give it its correct title) is a "Royal Peculiar" under the jurisdiction of a Dean and Chapter, subject only to the Sovereign and not to any archbishop or bishop.

For more than 1,400 years, a Cathedral dedicated to St Paul has stood at the highest point in the City.
Frequently at the centre of national events, traditions have been observed here and radical new ideas have found expression under the iconic dome. In many cases these events have left some physical record as well as echoes in the intangible memory of the building.
The present Cathedral, the masterpiece of Britain's most famous architect Sir Christopher Wren, is at least the fourth to have stood on the site. It was built after its predecessor was destroyed in the Great Fire of London in 1666, and services began in 1697.
This was the first Cathedral to be built after the English Reformation in the sixteenth-century, when Henry VIII removed the Church of England from the jurisdiction of the Pope and the Crown took control of the life of the church.

A Palace, a Prison, a place of Execution! An Armoury, an Observatory, and a Royal Zoo.
3 Queens of England lost their heads here - Anne Boleyn, Catherine Howard and Lady Jane Grey.
The Tower is where the Crown Jewels are kept (used in all coronations of our Kings and  Queens).

Tower Bridge has become a recognisable London landmark. It is sometimes confused with London Bridge, about 0.5 miles (0.80 km) upstream, which has led to a popular urban legend about an American purchasing the wrong bridge. Several stunt pilots have flown underneath the bridge.

Home to the British Prime Minister since 1732

A true to life working replica of the original Globe Theatre that was destroyed in the 17th Century.

Trafalgar Square has been the meeting and rallying point for demonstrations and celebrations for many years, dating back to 1830, the Squares focal point is Nelsons Column itself staning at over 169 feet tall.

Opened in 1871, and still remains a major entertainment venue.
take time to walk around and enjoy the Royal Albert Hall Stars, an engraved stone topped off with a brass star dedicated to key players in the building’s history, from its opening in 1871 to the present day. The inaugural 11 stars were unveiled on 4 September 2018.

Traveler pickup is offered
You will be collected and dropped off at a Central London location of your choice.

star star star star star
The tour with Paul was perfect. A perfect mixture of explanations and individual experiences. Good advices for spending the whole holidays in London. Highly recommended.

star star star star star
An outstanding private tour of London thanks to our guide, Paul!!! He had an in-depth knowledge of the city as well as its history. He was also very accommodating of our health issues. A Five Star Tour!!!

star star star star star
I cashed in my airmiles for this day trip and it more than delivered. Our guide Paul contacted a good few days before he tour by text and email so that we could come up with a plan of what we would like to do and cover. Our main request was to be able to ride the cable cars across the Thames as this was one thing that we hadn't been able to do in London before. Throughout the tour Paul kept up a running commentary and was extremely patient with my teenage son who is Aspergic and does tend to ramble on! We had plenty of opportunity to see the well known sites and also those learnt about in our school history lessons! All in all an excellent day and certainly recommended. Thanks Paul :)

star star star star star
Paul is a terrific guide, with an encyclopedic knowledge of London. We picked us up on time from our hotel, took the time to discuss what we wanted to see during the tour, and offered some excellent suggestions. He was always a very careful driver, and made sure we stopped whenever we wanted to and gave us the back story on many locations and events. Absolutely a terrific day!

star star star star star
Super professional. Our first time in London from USA and Paul was helpful, friendly, professional and provided us with so much information and history of London. Brought us to all the highlights of London and my daughters definitely enjoyed all the photos and memories for their insta! The cab was comfortable, upscale with mix of modern and touch of London history, we loved it! Paul was always on time within our tour and transfer to/from airport. We appreciated all his expertise and upscale quality. Definitely recommend.

star star star star star
We had an amazing tour of London. Our guide was very knowledgeable. My girls learned a lot as well. They couldn’t stop talking about the day.

star star star star star
We had an amazing time in London and Paul was a big part of that. Paul worked with us to fit in so many things all in a full day tour. We were picked up at our door and taken to many of the major attractions all while enjoying Paul's friendly personality and knowledge. He was prompt and courteous and the family absolutely loved his knowledge and friendly charm. We would highly recommend Bespoke Black Cab Tours.

star star star star star
We had a wonderful experience with Paul as our guide to full day London tour. Our 4 kids were entertained and Paul was flexible with our schedule and kids needs. He provided us with great history and a very close up view on change of guards! Would highly recommend this tour for families.
Previous Next
keyboard_arrow_up