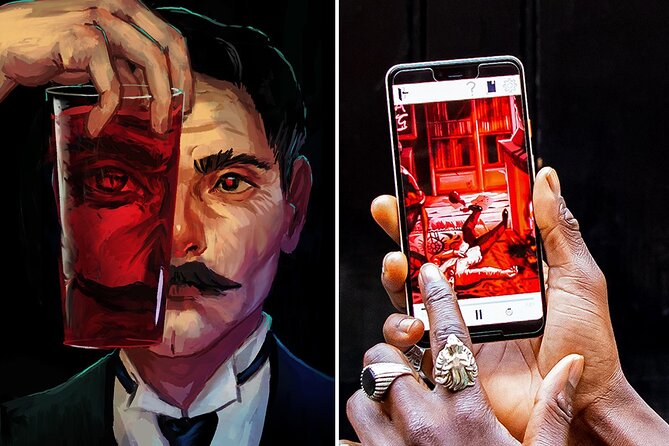 An ambitious journalist who has uncovered the unbelievable story of the shapeshifting doctor, will show you the way through the dark streets and alleys on this scary adventure. She is eager to share the details of a gruesome string of murders occurring around London’s busy Fleet Street with you, because no editor will allow her to publish the news in the paper.

This audio tour is self-guided via a GPS-based app downloaded to your smartphone.

There will be clues and interactions hidden in your surroundings – features that are triggered and show up on your mobile screen when you get close to them.

Through sound, images, and intriguing puzzles you will discover the horrible story of Dr Jekyll and his alter ego Mr Hyde.

This walking tour is perfect for anyone who wants to go sightseeing in London in a fun and flexible manner, as well as for audio book- and puzzle game fans!

INR 365
p.p. onwards
Itinerary
This is a typical itinerary for this product

The tour starts at Twinings tea shop, where Jane Austen and her family used to buy their tea. Across the street you can see the Victorian buildings that houses the Royal Courts of Justice.

The tour route wraps around the Temple area, which is built with the Temple Church in the middle. The chuch was founded by the Knights Templar during the 12:th century and this area is steeped in history. The Temple area is accessible through a number of gates that we will pass during the tour. These gates are only open at specific times of day, but if you pass an open gate and would like to look inside, just pause the tour.

We will walk along Victoria Embankment, with lovely views of the river Thames, and we will pass the city boundary dragon sculptures

We pass the little museum, Dr Johnson's house", which was the home of the english writer, lexicographer and literary critic who seems to have used the pen name Doctor Johnson.

In a very narrow alley called Wine Office Court we will pass by the old pub "Ye Olde Cheshire Cheese". It is one of a number of pubs in London to have been rebuilt shortly after the Great Fire of 1666. There has been a pub at this location since 1538 and the literary figures Oliver Goldsmith, Mark Twain, Alfred Tennyson, Sir Arthur Conan Doyle, G.K. Chesterton, P. G. Wodehouse and Samuel Johnson are all said to have been 'regulars' here.

At this old pub, we stop long enough for you to help Mr Utterson and Mr Guest compare Dr Jekyll's handwriting to Mr Hyde's.

We stop at this little church entrance to witness Dr Jekyll's second involuntary transformation to Mr Hyde. This church is relatively new, built in 1923, but it rests on the foundations of an old monastery.

Apothecaries' Hall is the oldest extant livery hall in the City of London, with the first-floor structure and arrangement of the Great Hall, Court Room and Parlour remaining as rebuilt between 1668 and 1670. We are stopping here to assist Mr Hyde when he is trying to mix his potion in order to transform back to Dr Jekyll.

Confirm time with the local provider in advance of your experience.
Dr Jekyll and Mr Hyde Self-Guided Audio Tour through London
9/24/2020 - 10/14/2023