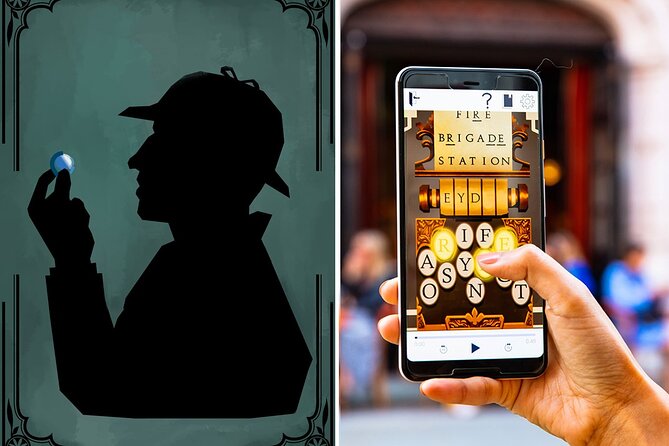 Step into the story: The Sherlock Holmes audio tour where YOU solve the case

An exciting Sherlock Holmes audio tour game where you step into the story and become the detective!

Join Dr John Watson on a walking tour through the Marylebone area of London. He will tell you the classic Sherlock story “The Adventure of the Blue Carbuncle”, as well as guide you to the spots where the action takes place. You will experience Sherlock’s Victorian London, as you assist in cracking the case of the missing blue jewel!

* This audio tour is self-guided via a GPS-based app downloaded to your smartphone.

* There will be clues and interactions hidden in your surroundings – features that are triggered and show up on your mobile screen when you get close to them.

* Through sound, images, and intriguing puzzles you will be challenged to use the art of deduction in your quest to become a detective.

* This walking tour is perfect for anyone who wants to go sightseeing in London in a fun and flexible manner, as well as for audio book- and puzzle game fans!

Step into the story: The Sherlock Holmes audio tour where YOU solve the case

INR 365
p.p. onwards
Itinerary
This is a typical itinerary for this product

Dr John Watson is a war veteran, and his story brings you to the Animals in War memorial - where you are to solve your first detective assignment.

Visit the Eagle Squadron memorial and look for more clues

We'll make a quick stop at the tranquil Brown Hart Gardens, to solve a memory puzzle of possible suspects.

The tour continues into this alley hidden away from the busy Oxford street.

At the museum of the Wallace Collection, you'll crack a mysterious cipher.

When we reach the Sherlock Holmes statue, you'll hopefully be on the tail of the culprit!

The tour finishes at the Sherlock Holmes museum on Baker Street. At this point, you'll be able to call yourself an accomplished detective.

star star star star
Good way of touring round the Mayfair area. Some nice spots along the route. The puzzles were fairly simple - this would be ideal for families with kids.
Previous Next
keyboard_arrow_up